To: University of Saskatchewan Chancellor, The Honourable Roy Romanow

This campaign has ended. 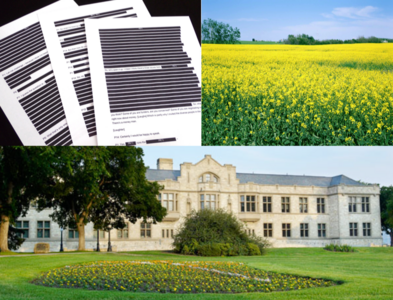 “Someday we shall look back on this dark era of agriculture and shake our heads. How could we have ever believed that it was a good idea to grow our food with poisons?”

― Jane Goodall, Harvest for Hope: A Guide to Mindful Eating


Since the Johnson vs. Monsanto trial in California, we are much more aware of the role that Monsanto/Bayer, with academic researchers in tow, continues to play in undermining public discourse and misusing University resources and students to willfully spread invective and publicly discredit a large body of scientific research, respected organizations such as IARC (WHO's International Agency for Research on Cancer), as well as non-GMO farming, non-GMO labelling initiatives and environmental organizations.

In December 2015, a secret symposium was held at the University of Saskatchewan with the title “Research Management and the Right to Know.” The 20 invited attendees included members of the U of S administration, select faculty (including notorious US pro-Monsanto academics), communications personnel and representatives from industry. The timing of the event suggests that it was partially in response to the findings of IARC on potential carcinogenic effects of glyphosate. The symposium also followed closely on the heels of two investigative reports in the Saskatoon Star Phoenix based on the "Monsanto papers" that revealed the cozy relationship between Monsanto and Prof. Peter Philips at the U of S Johnson Shoyama School of Public Policy.

Our Academic Integrity Legal Group, comprising rank and file faculty members and concerned citizens affiliated with the University, decided it needed to fight back against this blatant lack of transparency and public accountability. Our first attempt to obtain the proceedings of the symposium through the legislated freedom of information processes was stymied by the University. Heavy redactions (85% of the transcript) indicate an intentional cover-up with regard to "management" strategies concerning U of S research and industry ties.

When we made a request for review to Saskatchewan’s Information and Privacy Commissioner, it was his determination that most of the redactions were unlawful, and he recommended that the University should lift most of the redactions to make the transcript more publicly accessible. The University’s refusal to comply has impelled us to begin costly legal proceedings paid with personal funds, which the University has strenuously resisted, using its much greater (public!) resources. A judicial review in Court of Queen’s Bench is pending.

WHEREAS the University of Saskatchewan was founded for, and has a proud tradition of serving as an institution of higher learning for all the people of Saskatchewan, advancing unbiased science and knowledge for the benefit of society as a whole, independent of commercial interests;

WHEREAS the University of Saskatchewan’s administration has recently exerted its considerable efforts and resources towards suppressing information with regard to the University's corporate partnerships with agriculture chemical companies, like Monsanto, Bayer, Dow, Syngenta et alia;

WE THE UNDERSIGNED do petition University Chancellor, the Honourable Roy Romanow (elected by University Senate), to make representations within the University of Saskatchewan Administration to cease their legal obstruction and to comply with the prudent and reasonable recommendations of Saskatchewan's Information and Privacy Commissioner to lift the University's heavy redactions on the proceedings of the Symposium on "Research Management and the Right to Know" (Dec. 2015) and similar documents requested for public scrutiny.

With the redactions lifted, the blatant attempts to suppress and hide the collusion between U of S industry chairs, faculty and the GMO/AgriChemical corporations will be more clearly revealed. The next step will be an even more public indictment of these activities. And we promise to keep you, our supporters, informed as we continue this struggle. Please join us!!!