To: Our Members of Parliament 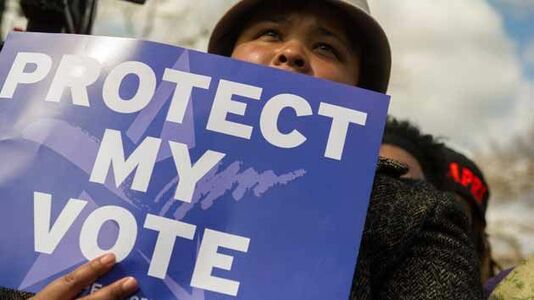 Remove the parts of the new elections law that would suppress voting by young people, Aboriginal people and low-income people. Replace those parts by giving election fraud investigators the power they need to compel testimony from political operatives.

The Harper Conservatives are trying to rush their 242-page election law through Parliament with minimal debate and no expert testimony, despite major flaws that would have lasting consequences for our democracy.[1]

It boils down to this: instead of giving the people who investigate election fraud the power to compel testimony - the key power Elections Canada has needed to get to the bottom of the robocall scandal - this new election law would make it harder for young people, Aboriginal people and low-income people to vote.[2]

Incredibly, the misleadingly named “Fair Election Law” would even make it illegal for Elections Canada to promote voting.[3]

The law contains some good measures to curb fraudulent robocalls. However, it imposes unnecessary new voter ID laws that would make it illegal for people to vote by using a voter identification card or by having someone “vouch” for their identity with a legal statement.

Independent reports have confirmed that fraud by individual voters is so rare that it basically doesn’t happen. In turn, 120,000 Canadians voted by being vouched for in the last election, and this change would hurt young people, Aboriginal people and low-income people the most.[5]

We’ve seen a similar strategy used by US Republicans to disenfranchise people who they know are less likely to vote for them. 37 state legislature have enacted voter ID laws that mostly hurt the poor, people of colour, and women.[6]

Please sign this urgent petition to stop US-style voter suppression tactics from becoming the law of the land in Canada, and call for our elections watchdog to have the power it needs to compel political operatives to testify.

Update: We have partnered with Council of Canadians and the Canadian Federation of Students to deliver over 82,000 signatures collected by the three organizations at Conservative MP offices on March 25th. To join an action near you go to http://www.leadnow.ca/let-people-vote/

If you've already signed, would you consider donating to help us fund these hard hitting radio ads focused on the Conservative MPs in the ridings? Thanks to your donations, we've already been able to spend $10k on these ads! You can hear them here: https://leadnow.netdonor.net/ea-action/action?ea.client.id=1694&ea.campaign.id=25707

Thanks to everyone who has signed and shared the petition to stop the Conservative's election act from making US-style voter suppression Canadian law. Your campaign was on Power and Politics on February 25th.

Hey friends! We just delivered your 53,000+ Stop Voter Suppression signatures to Parliament. Here's our co-founder Adam Shedletzky presenting the petitions to Craig Scott, David Christopherson and Alexandrine Latendresse from the NDP, Stephane Dion and Scott Simms from the Liberal Party of Canada and Green Party Leader Elizabeth May.

Good news. Everyone expected the new elections act to be rushed into law. However, thanks to your pressure, and the good work of several pro-democracy groups, it looks like the committee that's reviewing the law has decided to slow down. Please share this petition so we can keep building momentum!