To: City of Victoria 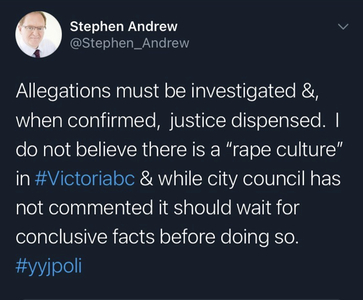 On March 28th City Councillor Stephen Andrew tweeted "I do not believe there is a 'rape culture' in Victoria."

Stephen Andrew's assertion that there is no "rape culture" in Victoria exposes a deeply problematic mindset that has no place on city council.

What's worse is that Stephen Andrew denied the exisitenace of rape culture in response to the Survivors Story Project: https://www.instagram.com/survivorstoriesproject/
A community that have supported survivors and given them a platform to bravely come forward and share their credible stories of traumatic rape and sexual assault which have resulted in the recent termination of at least four men in the real estate industry.

These women have found some justice where other avenues have failed. Stephen Andrew undermines this community of support and the bravery of these women coming forward by referring to them, in his 'apology' tweet, as 'justice by mob' that 'isn't good enough'.

We think Stephen Andrew isn't 'good enough' to represent the City of Victoria.

Stephen Andrew doesn't seem to know or care that less than 5% of sexual assaults are reported to police or that ⅔ of survivors report NOT having confidence in the criminal justice system.

Most victims of sexualized violence, regardless of gender, do not report for fear they won't be believed. Stephen Andrews public statements further discredit and dismiss those who have the strength to come forward.

Stephen Andrew deleted his tweet ONLY because of the public backlash he faced and in an act of reputational damage control he took to the media to say HE would lead a 'task force on sexual abuse'. We are unmoved by Stephen Andrews claims that he was "awakened" in the span of 24 hours. We do not want someone who just hours before did NOT believe survivors to take a leadership role in determining the path forward.

Apologies are not enough. We are calling on him to resign.

It is long overdue that Victoria council address rape culture in our city by advancing its 2019-2022 Strategic Plan goal to "explore ways to end sexual harassment and assault in Victoria" but THEY MUST DO MORE. We don't need a task force, we need an action plan. We need it immediately and we need it to centre the voices and experiences of survivors.

We, the community, believe survivors and we NEED our city council to, too.

Once we have reached our signature goal we will send the signed petition to Mayor and Council for action.