To: Mayor of Vaughan, Maurizio Bevilacqua

Let's Rename the City of Vaughan 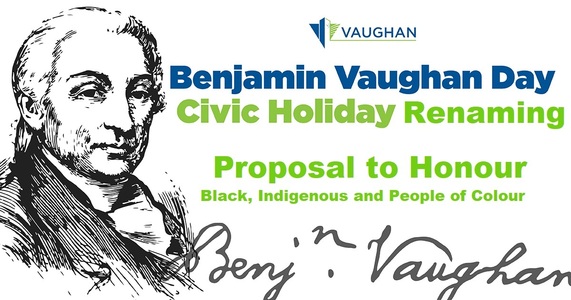 To Mayor Maurizio Bevilacqua,
Our first request is that a new historical hero is recognized for our civic holiday this August 2020, instead of Benjamin Vaughan- a pro-slavery politician. We'd like to see open dialogue and engagement with Vaughan citizens- particularly Black and Indigenous citizens whose lives are directly impacted by this issue- to determine who the new historical figure could be. We would also like the municipal government to consider renaming Vaughan to honor the people who made a positive, meaningful impact on our community.

In his time as a Member of Parliament, Benjamin Vaughan tried to persuade other MPs to continue the practice of slavery which is based on the ideology of domination and superiority over another race- at a time when others were actively abolishing it. It is shameful that we uphold these people as heroes in our communities by naming cities after them and declaring civic holidays in honour of them. Language, names and declarations of honourable historical figures matter! The community is speaking out and we'd like to organize with a petition.

We need to stand up against people like Benjamin Vaughan who have made decisions as politicians and everyday humans that have caused trauma, violence and even death for Black, Indigenous and people of colour. A small step in the right direction, a potential answer to the Truth and Reconciliation Commission of Canada's many Calls to Action from our First Nations, Métis and Inuit people across the country, and a drop in the vast ocean of work left to do in creating an anti-racist city of "Vaughan".

In person or by e-mail if necessary.