Help save the lives of Afghans who worked for Canada

Canadian Women for Women in Afghanistan

Canadian Women for Women in Afghanistan 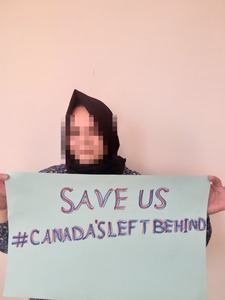 As a Canadian who cares about our government’s commitments to vulnerable Afghans, particularly those who supported our government’s 20 year mission in the country through their work, I am deeply disappointed by Immigration Refugees and Citizenship Canada’s announcement that the Special Immigration Measures (SIM) program designed to help those who supported Canada will close while thousands of vulnerable Afghans remain in the country without alternate means to reach safety. It is disingenuous for IRCC spokespersons to suggest that Afghans can seek alternate pathways to resettlement in Canada when there are so few safe and accessible options available at all.

The fact is, Afghans who supported our government’s mission and share our values are being left behind by Canada, to face the threat of death at the hands of the Taliban who view them as targets precisely because of their relationship to our country. Among their many victims are women human rights defenders, education activists, ethnic minorities, LGBTQ+ activists, and others who fought for free speech, the fundamental rights of women, girls and gender diverse persons, a flourishing civil society – all of which the Taliban see as a threat, and have rapidly destroyed since they seized power one year ago.

Promises for the resettlement of Afghans, including those eligible for the SIM program, were offered as a core pledge of the campaign with which the current government was reelected last September; these commitments were made not only to the Afghan people, but to the Canadian public. But less than 17,000 of the 40,000 included in this promise have reached Canada safely, and many more are left to face life threatening consequences on their own, without support from Canada – despite having enduring relationships to our country and our government’s work, making them eligible for the SIM program. It is a betrayal of the promises made, and of the Canadian public, to now close this program without ensuring the life saving support which could be provided through an extension of the SIM program.

I strongly urge IRCC, Minister Fraser, and Prime Minister Trudeau to consider the calls of Canadian civil society to extend the program by a further 12 months with a new, additional allocation of spaces to allow a maximum number of vulnerable Afghans who have supported Canada and who do not have the means to access other pathways, to reach safety in Canada. In their current response to the crisis in Ukraine, and before that in Syria, our government has shown that it has the capacity to swiftly resettle vulnerable groups. I echo the call of the Standing Committee on Citizenship and Immigration for extending the special immigration measures afforded for Ukrainian nationals to other vulnerable groups, including Afghan nationals, and those of the Special Committee on Afghanistan to streamline access to the SIM program for qualified Afghan applicants.

As Canadians, we can be proud of the reputation Canada has earned for providing safety to persecuted people from across the globe. We can't now tarnish that reputation by turning our backs on Afghans who are at risk precisely because they worked with us to advance values which we as Canadians share -- those of democracy, human rights, and gender equality.

The Taliban is the most misogynist regime on the planet today, committing large scale human rights violations, establishing a system of total gender aparthied and specifically targeting those they see as promoting “western” values. As Canadians, we must now hold our government accountable for the harmful consequences of their actions internationally, and call on PM Trudeau, Minister Fraser and IRCC to fulfill a moral obligation to save as many lives as possible.