To: Members Of The Legislative Assembly In British Columbia 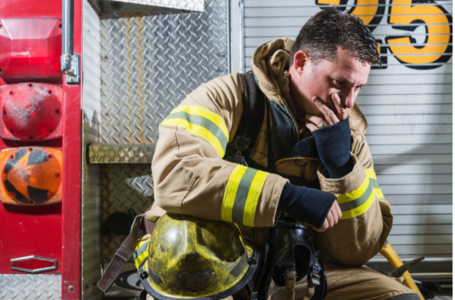 Members Of The Legislative Assembly In British Columbia

Due to the nature of the work they do for us, Public Safety workers (Police Officers, Fire Fighters, Paramedics, Emergency Dispatchers, Correctional Officers, and Others) are exposed to traumatic incidents and experience traumatic stress at levels well above those in the general population.

Employers have been slow in developing safety programs and education programs to better inform and protect Public Safety Workers across Canada.

Workers Compensation Law has limited delivery of appropriate financial supports and treatment provided to those workers who fracture under the often repeated traumatic stress they experience on the job.

This leaves workers unprotected and those who's experience causes psychological injury go on to develop Post Traumatic Stress Disorder and other mental health issues requiring treatment.

With limitations established under current provisions in Provincial Workers Compensation Law, many Public Safety Workers are falling through the cracks.

The tragic outcome is an increasing level of worker suicide across Public Safety jurisdictions coast-to-coast.

To ensure full protection for Public Safety Workers and their families we need to ensure that solid provision is granted through Workers Compensation Legislation in every Province in Canada.

The Government of Canada is currently working on a National Strategy in concert with Provincial Governments. However the wheels of progress, as we know, move far too slowly. Too many families are experiencing the loss of their Public Safety Worker family member.

To address this issue Provincially, we need Amendments to Workers Compensation Law in British Columbia that empowers adjudication and ensures claims are honoured for psychological injury resulting in PTSD and other mental health illness for Workers in Public Safety without delay.

This is best achieved through language in Workers Compensation Law that considers PTSD and other mental health illness in Public Safety Workers presumptive.

Presumption of Illness language ensures immediate supports for injured workers without interruption of income throughout treatment. This ensures protection for both the worker and for the worker's family.

To date, the Provinces of Alberta, Manitoba, and Ontario have legislated presumptive clauses in governing legislation. We hear the Provinces of Nova Scotia and New Brunswick are following their lead.

In British Columbia, after years of discussion on the issue, the Government continues to stall in bringing forth and enacting presumptive legislation to protect Public Safety Workers.

Government has not supported this Bill. Nor have they chosen to follow the lead of other Provinces and brought forth amendments of their own.

We are asking now for your support. We ask the Government to bring forth amendments to the Workers Compensation Act in British Columbia, in line with the changes to legislation already granted in other Provincial Jurisdictions.

We ask as public citizens that our Government now act. This is simply now the right thing to do.

These workers serve British Columbians in our darkest hours of human need.

We need you now to stand up and be counted in supporting workers by insisting on legislative action to bring amendment to the British Columbia Workers Compensation Act providing presumption of illness for Public Safety Workers in BC.

In recognition of the crucial role paramedics, firefighters, police officers, emergency dispatchers, corrections officers, and others play in ensuring the health and safety of British Columbians, this amendment guarantees that they will receive timely support and treatment when they are suffering from exposure to traumatic events.

Signatures will be delivered via email.

We're in the process of updating the signatures received from the recent event held at English Bay. We've yet to hear when Legislature will resume. Once we've received information on this, we will contact Mr. Shane Simpson, MLA for Vancouver-Kingsway for guidance as to when we can deliver all signatures in this letter-campaign (petition) to Mr. Simpson. We thank all who've supported this cause. We thank Mr. Simpson and the BCNDP for their ongoing support to bring presumption of illness to the Workers Compensation Act in BC.

Terrance has conducted two successful events of late at English Bay. This past weekend, our supportive MLA and critic for Work Safe BC, Mr. Shane Simpson, donned the chains and demonstrated his continuous support on this initiative. Thank you Shane, and thank you Terrance for conducted two more successful events to add to the events in both Whistler earlier in the year, as well as on Legislature Grounds on Canada Day. Thank you to all who've signed and shared this effort. Keep up the incredible work. Be Well. Darren Gregory "Breaking the Chains of Silence." "First Step Hope."

Way to go Terrance. Your effort is paying off in spades. Cheers.

Thank you all, so very much, for the support.

Shane Simpson, MLA and Work Safe BC Opposition Critic has agreed to accept the campaign letter with signatures for fall or spring, dependent upon sitting in legislature. He offered encouragement, and continued support to see presumption of illness language amended in the Workers Compensation Act in BC.

Presumption of Illness language has a purpose. That purpose is to ensure uninterrupted income, treatment, and full supports are provided to any Public Safety Worker psychologically injured in the course of employment.

Judith Herman, a long-time trauma specialist, constructed a trauma treatment model of best practice, not currently utilized by Work Safe BC, as far as we know. We'd know more if Government would allow us as survivors to share the knowledge we've gleaned through our own self-education and recovery.

This best practice model is endorsed, as well, by Dr. Anna Baranowsky, founder of the Traumatology Institute, a leading educator for issues of psychological trauma and PTSD in Canada.

This link leads to a description of the best practice framework. Thank you to The Traumatology Institute and Dr. Anna Baranowsky for informing us and endorcing this treatment model.

The Trauma Recovery Blog, Breaking the Chains, & The North American Fire Fighter Veterans network, thank you all for your support.

The intent is to run this campaign for delivery in the fall to all members of the legislative assembly, via email